Sun with Herschelprism V1. At the end of december i purchased a Herschelprism. And then? 1,5 months of clouds! On february the 12th, the seeing conditions were not good, but i saw the sun. This was reason enough to try my herschelprism for the first time to banish the clouds.

Decision to buy the Lacerta Herschelprism

On the market are a handfull of herschelprisms from different manufacturers. I decided to buy the one from Lacerta, because this one came in a set with ND3-filter and the possibility to use T2 on both sides of the prism or 1,25 on the camera side. I did not plan to use 2″ in the next years.

I had to answer if I want to use my 80/600 Vixen ED80sf or the achromat Skywatcher Evostar 90/910. Due to the plan to use a narrowband filter anyway, i have chosen to use the Evostar with the longer focal length.

Choice of the Camera

It was the plan to use my CANON EOS M100(a) to start with, taking photos of the sun. One of the reasons to buy a Herschelprism with T2 adapter because i wanted to take photos of the full sun disc. The APS-C chip seems to be nice for doing this. The resolution of the chip and the video abilities of the camera are also ok.
My guidecam OMEGON 1200b was an alternative. I can say, that I will test this one day, due to the small chip. Maybe for some detail photos.

Putting the three components together

And this was the building plan:

I used the T2 thread to build the three main components together. The focuser has only a very short way out, of about 2-3mm, to get into focus.

The photography of the sun is a bit like planetphotography. Usually this is done by making short videos.
I did a series of videos with a length of 1 minute in HD at 50 frames per second and a few series of 10 RAW photos with an exposure of 1/100s at ISO 200.

It was not easy to get into focus without finetuning and with the bad seeing conditions.

The Astrophoto of the Sun with Herschelprism V1

Here is the final Result of the astrophoto in high resolution on Flickr: 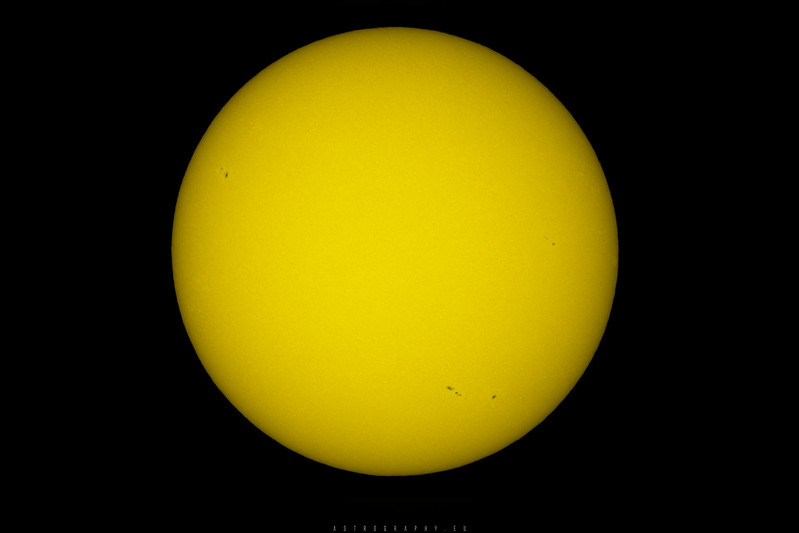 The final picture is nice, but it is definetly possible to get better results in future with better seeing conditions.

I did the processing with PIPP, Autostakkert! 3 and Affinity Photo.

For the final picture I used 3 out of 40 pictures from the RAW sequence. I did not like the results I got from the video sequences with several thousand frames. But this is not necessarily the way for the future. Visit of the Astro AG of Johannes Gymnasium

2. November 2022 / Astronomy, Hoher List / No Comments on Visit of the Astro AG of Johannes Gymnasium 2. October 2022 / Astrophotography, Backlash, Equipment, HEQ5-Pro / No Comments on How does Backlash look like? Starlink video while preparing for IC 5070